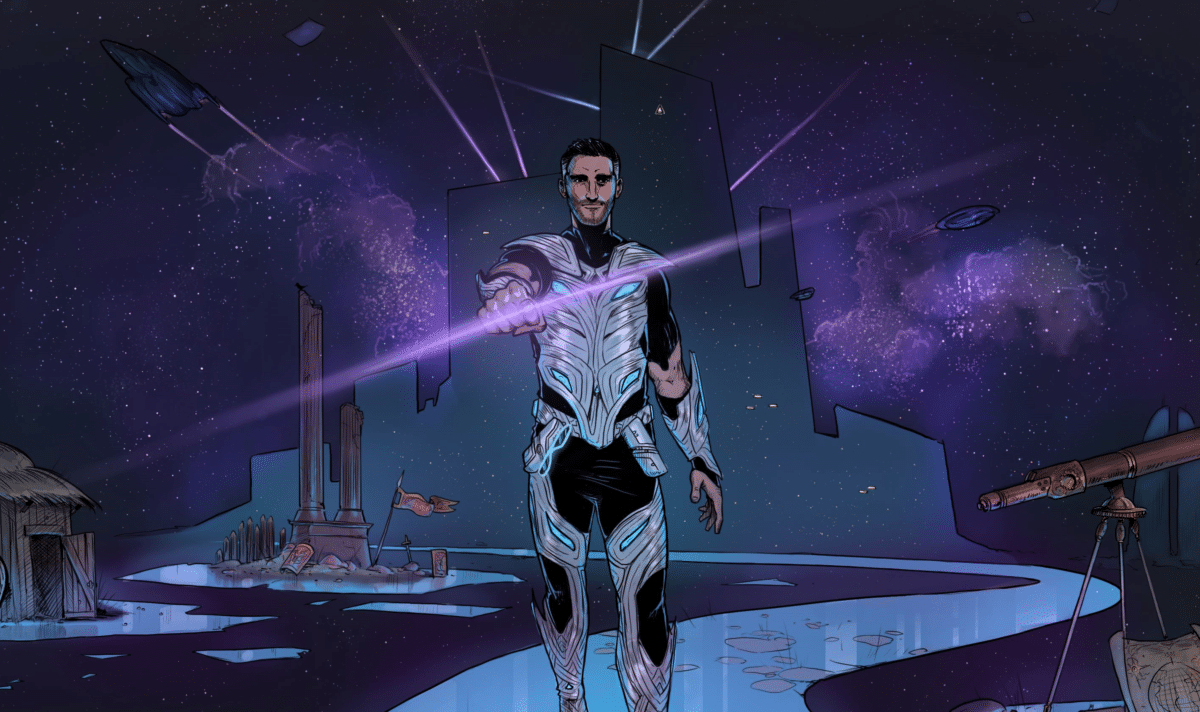 After his First Time LP, Time Composer, is back with his new single, Time Jump, available for download on the 07 December 2018 on digital download platforms.

During 2017 we had already talk ed about the composer Sylvain Bezia about the release of First Time LP, the beginning of Time Composer’s adventure. Eager to limitlessly explore music across its spectrum, while being help by futuristic visuals, Sylvain came up with the idea to embody a composer from the future who uses his music notes as well as his instruments to travel through time.

The result is a skillful mix between Gorillaz creativity, Daft Punk’s discretion and Vangelis sensitivity.

‘In 2270 I discovered the secret to time travel! My magical ring, laden with my strongest emotions, opens a temporal pathway and propels my Laser-Piano ‘Stella’ and me towards different eras, to the rhythms of my melodies.’

Already endorsed by a large public, Time Composer is the official composer for the French National Olympic and Sports Committee and composed the soundtrack destined for the launch of the new Porsche 911. With a vibrant and acoustic retro-futuristic electronic universe, Time Composer, Sylvain Bezia’s alter ego, takes his audience on a journey between light and sound with an original show between a visual and acoustic environment. By collaborating with a team of engineers, he has worked on perfecting his very own instrument, a Laser-piano “Stella” which unites his three favorite instruments: the piano, the synthesizer and the laser harp.

In order to create the artistic and fantastic universe of Time Composer, Sylvain surrounded himself with numerous professionals. His musical process is back ed in particular by Kurt Ader (renowned sound designer), by Antoine Chabert who is none other than Daft Punk’s mastering engineer, by Brahim Rachiki who is Madonna’s choreographer and was Michael Jackson’s choreographer, by Philippe Brodu the director of Korg France (which sponsors the artist), by Francis Rimbert, Jean-Michel Jarre’s keyboardist and all the laser-harp team, as well as Eric Darrigrand, his conductor, Kilian Amacker and Alexandre Bilé his musicians and Quentin Dognon, his illustrator.

Time Jump between the universes of Daft Punk and Kavinsky

Time Composer is back with his new single, Time Jump, available on the 7th of December 2018 on the digital download platforms: iTunes Store, Amazon Music and Google Play. A new single that we can describe as being a cross between the universes of Daft Punk and Kavinsky. During the press release of Time Jump we took a moment to interview the artistonce again:

When asked if Time Jump is the first single from a new album, he answers that: ‘The single fits into the continuity of the First Time EP, which is the starting point for the musical adventure in which our hero discovers in 2270 the possibility of time travel. Time Jump tells the story of Time Composer’s first time ‘jump’. So yes, this song is an extract of his story which will be developed into future singles and albums.’

Regarding the visual aspect of the single, Time Composer tells us he is very proud of the cover drawn by Qénus, Quentin Dognon: ‘It required many months of thought to perfectly correspond to the universe I want to create. We started off with a very sci-fi concept to finish with a cover inspired by one of my first passions: comic books. The ‘Time Jump’ single’s cover shows Time Composer walking along the path of time opened up thanks to his magic ring.’

The Time Composer universe is rich enough to spread across multiple media so naturally we asked Sylvain if he was contemplating expanding the Time Composer story across multiple mediums at once: ‘Yes absolutely. That is where the concept of the adventure lies. I want to share with my public my passion for music, but also comic book super-heroes born in pop culture, or even history. I have therefore decided to script my artistic career as if it was a science fiction show, where every one of my compositions tells a different story, linked together by time travel. All these musical stories will be presented through video clips and comics. A lot of elements are still in the works, so people will need to be patient…’

To conclude, Sylvain looks forward to seeing us soon ‘in the summer of 2019 for a new single with electro-symphonic sounds. Indeed, I recorded with my musicians and the Donna Musica symphony orchestra at the mythical Studios Ferber in Paris. This new magical melody, combining classical music with electronics, recounts Time Composer’s dreams of yesteryear. Unfortunately, I can’t tell you any more… However, I invite you to follow me on my social networks because clues will be posted there as we approach its release.‘

Time Jump unveils pure, inspiring, deep, rhythmic and original music that will leave no one indifferent and will lead everyone into a unique musical experience.